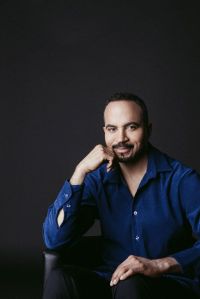 Steve Washington brings “A Toast to My Heroes” and his highly acclaimed vocal talent to Riderwood’s Chapel at 7:30 p.m. on Friday, July 19 under auspices of the Performing Arts Council.

A headlining vocalist on the world’s finest cruise ships and a star in leading clubs around the globe, Steve’s show here will be his tribute to troubadours he admired—Billy Eckstein, Johnny Hartman, Joe Williams, Nat “King” Cole, and Johnny Mathis. He will be accompanied by William Knowles on piano and Mark Saltman on upright bass.

Starting 30 years ago with Princeton University singing groups and theater productions, Steve went on to acting and singing with professional groups. He had roles in Sondheim’s “Merrily We Roll Along,” “A Midsummer Night’s Dream,” and “Hey, Mr. Producer,” a musical concert in which he portrayed the engineer in “Miss Saigon,” and the phantom in “Phantom of the Opera,” among others.

Steve has been featured in multiple Italian tours, in New York City’s Metropolitan Room, and in Moscow’s famed International House of Music during a Russian tour. His CDs include “Right to Love” and “Skylark.”

Tickets are on sale in all dining lobbies Monday and Tuesday, July 15 and 16. NOTE: The show will be in the Chapel due to construction in the Encore Theater area.