Welcome to 2017! If you’re like me, it seems that with each new year, the number for the year seems like it must be a misprint because it’s so future-like. It’s as if, like Buck Rogers, I’ve been exposed to some sort of strange radioactive gas and thrown into the future some 500 years. The year 2017 looks like it might as well be 2517! Do you ever feel like that?

I was talking to the kids (my wife Jenne and I are blessed with four children) the other day about technology and marveling at how we have access to all sorts of music with the push of a button or two (have you heard of Pandora, or Spotify? I am now learning about this!). Throughout the conversation, I must have had this look that was something like, “You’ve got to be kidding? I can have access to all of that?” They were looking back at me like I was some sort of Neanderthal because I was still storing compact discs in cabinets. And, yes, you should have seen the look on their faces when we were talking about my keeping some cassette tapes. I even have some reel to reel tapes of my Dad’s, and eight track tapes stored somewhere, right next to the vinyl albums (which I had to explain about how they played through a needle). 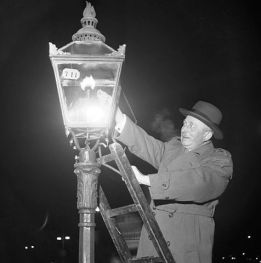 These conversations never stop throughout history. For example, can you imagine the conversations that took place in regard to the evolution of something we take for granted such as basic street lighting? It went from fire, candles, oil, gas, and finally electric. In 1697, the Common Council, in what is now New York City, mandated that every seventh house “cause a lantern and candle to be hung on a pole during the dark time of the moon.” Sixty years later, officials levied a tax for “installing lamps, paying watchmen to attend them, and purchasing oil.” Gas street lighting replaced oil lamps in the 1820s, starting at Broadway and Grand Street. And in 1880, the first electric street lights arrived along Broadway between 14th and 26th Streets—as seen above in this sketch from 1881.

Technology, for better or worse, changes. Thankfully, no matter what changes take place with technology, the things that really matter don’t have to change in the new year. Love. Family. Friendship. Faith. Community. I wish you the best of all of these and more as we enter into 2017. (No, the year is not a misprint!)